Alex and I always used to drink in the same couple of pubs and yet there are thousands of pubs and bars in London (3800?). Since 2007, Alex and I have been trying to visit as many of them as possible before our livers pack in and we have to slow down. This is a record of these pub crawls.

We started with a mission to visit every pub in the City of London (The Square Mile). We completed that in just over two years and have since been expanding out to other parts of London. You can see a summary of our status here.

Download the slides we refer to in an interview with the Sunday Session. 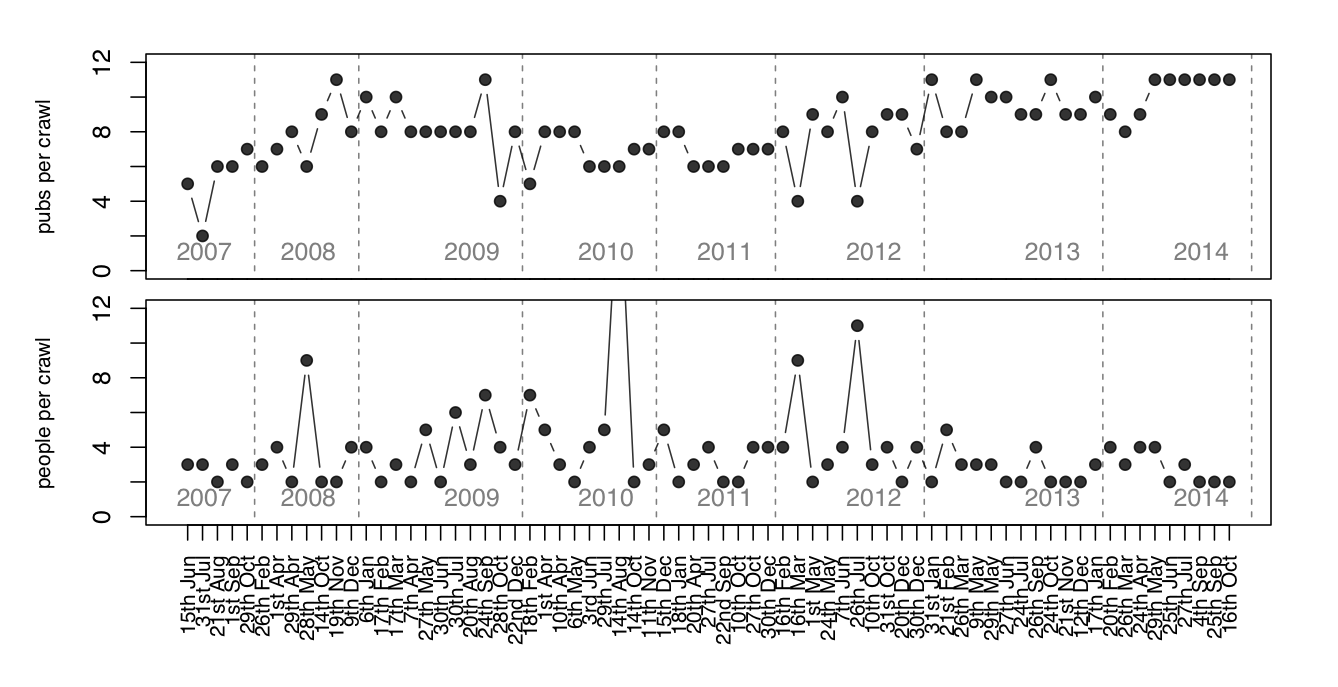 I met Alex in the Hop Poles near Hammersmith tube station for our follow-up to the previous crawl. We cleaned-up a bunch of pubs in the area before heading south. We Stopped in the Distillers, Old Suffolk Punch (OSP) and the Southern Belle (all good pubs) before ending up in the Crabtree. This pub has a great outdoor space but we were in the middle of nowhere (next to Craven Cottage). We made a break for the Coulton Arms and vowed to begin near Baron's Court next time.

I met Alex in the Swan near Hammersmith tube station. We headed north from there twoards Brook Green stopping at Bellushi's (!!!) and gatecrashing a Sony party at the Draught House. We paid a second visit to the Brook Green Hotel where we bumped into Dave who I work with. This prompted a thought about how unlikely it is to bump into someone you know in a pub somewhere in London (think birthday paradox). We moved on to the Queen's Head where we met Steve (who I aslo work with) and headed eastwards. We stopped at four more, ending near Steve's house in West Kensignton.

I met Alex in the Green followed shortly by the Other Alex (D). This is just around the corner from QPR's ground and apparently often packed with footie fans. We moved across the road to The Defectors Weld which is massive and serves quite good beer. We headed up to Westfield :\ to the Bull and then south to proper pubs like the Bull and the Havelock Tavern. We then looped past the Bird in Hand, Jameson, Brooke Green Hotel and finished in the Richmond.

I met Alex in The Hillgate which is pub we somehow managed to miss on our previous Notting Hill crawls. We headed west to a few pubs around Ladbroke Grove before hitting Shepherds Bush for Bellushi's! We found a Brew Dog bar there that sold dangerously strong and tasty beer (mistake to have 4 1/3rds). We ended on a whiskey in the Sindercombe Social which was an unusual end to a pub crawl.

Having told Dave I am never late for a pub crawl. I was 5 min late meeting Dave and Alex in Ye Olde White Horse. I even had to leave them in the pub to get some food! We met Fran in the George IV which was pub with a strong funk of farts when we visited. Nice!. From there we headed west via a student union bar (3 tuns) and also visited a previous favourite, the Lowlander. We ended on a high note in the Craft Beer Co.

I met Alex in the Theodore and Bull Frog which as you might guess by the name is more bar than traditional pub. We stayed with that theme for All BAr One before getting to The Beer Room in Charing Cross station which is actually not terrible for a station pub. From there we headed along The Strand to the Savoy Tup before heading north to Covent Garden for the Punch and Judy and a few others we have somehow not managed to hit before.

b) All Bar One
6 Villiers Street, London WC2N 6NQ

We had Fran and Dave with us for our yearly romp around Southwark. We met in the Globe for a few before heading off to the Rack where we met a guy sat at the bar with a load of cheese doing an impromptu beer and cheese pairing session. He had quite a big knife and a threatening manner so we ate the cheese and didn't question too much. From there we made it do a bunch of pubs that were open and five that were closed or gone.

4th December 2014 - Around Temple and The Strand

Just Alex and me this time. We started in The George near the Temple. From there we headed next door to Daly's Wine Bar that had beer on tap. We then found a bunch of pubs we did not know existed that were quite good. Devereux is right next to the Temple and the exteria has a whiff of that place Harry Potter goes shopping. The Temple Brew House was a microbrew pub and well worth a visit. From there we hit a bunch of places not worthy of mention. One thing to note is me hijacking a karaoke session in the Walkabout.

Alex and I were off to see (probably) the last gig Carter USM played. We decided to get in a pub crawl before the gig which with hind sight was probably a terrible idea. We started in the Canterbury Arms where a load of other Carter fans were gathering (Dog T-shirts). From there we jaunted past another five pubs before the gig. We ended up at the after party in Brixton Jamm where Clinton USM did a set and I surprised everyone with a stage dive! I ached like hell the next day. Alex tells me he had a fat ear from getting booted by a stage diver in the Brixton Academy.

I met Alex in the first of two Red Lions. Nice pub down an ally as all the best ones are. We headed east around Pall Mall then to Piccadilly and finally down towards Charing Cross. There was some confusion over the Old Shades as we were certain we were drinking outside it last time but did not have a record - hence the x