I was listening to No Agenda (podcast) the other day and they touched on the topic of Wilhelm Reich. This guy sounds like a proper pseudo-science nutcase who blessed the world with such concepts as Orgone energy and cloudbusting. Not so much ’standing on the shoulders of giants’ as chucking out the mass of accumulated knowledge and starting again, making it up as you go along. Genius or crackpot?

The Wikipedia artical is well worth a read. 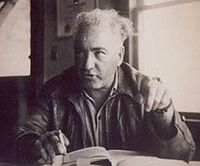