I have nothing against Swindon. I love their crazy round-abouts and the Oasis leisure center but I can’t help feeling that the announcement on April 1st that the UK Space Agency will be based in Swindon is a jape… 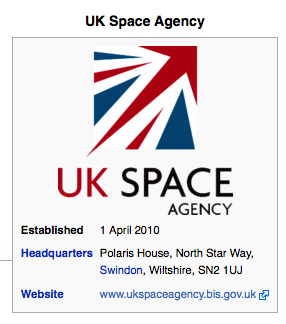 From wikipedia… The UK Space Agency is a United Kingdom government agency responsible for its space programme. It was established on 1 April 2010 to replace the British National Space Centre and took over responsibility for government policy and key budgets for space and representing the UK in all negotiations on space matters. It “[brings] together all UK civil space activities under one single management”. It is initially operating from the existing BNSC headquarters in Swindon.