The pictures below show one of the few remaining examples of the XCite!™ pheromone wipe. This product was the brain child of a man we shall refer to as Mr C. The story goes that Mr C was flying back from the USA where he had seen advertisements for bottles of human pheromone solutions, costing 60 quid per bottle. 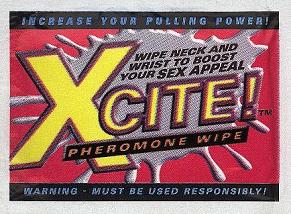 Mr C wondered who would be crazy enough to pay $60 for a bottle of pheromones that would probably go off in a few months… Whilst pondering this thought, Mr C had the idea of selling little bits of pheromone for a little bit of money. At that moment, Mr C was wiping his face with a little foil-wrapped lemon-scented towel (as you do on an aeroplane). That was the connection that triggered the brainwave… A foil-wrapped towel impregnated with pheromone solution for sale in pub toilets!

Back in England, Mr C set about obtaining the pheromones (male and female) and experimenting with delivery methods and doses. Once perfected, test batch of around 250,000 wipes were produced like the one shown on the left. 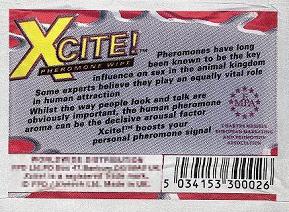 There were male and female varieties (blue for a boy, pink for a girl), so the one shown here has girl pheromones. The idea was to vend the sachets in bars and night-clubs next to the condom/tampon machines in the bathrooms.

Alas, after the first run, no more were produced. I don’t know if it was because the profits were too low or there was difficulty in getting them to where they would sell but for some reason, only the first batch ever saw the light of day. Mr C tells me that some people are keen to start it up again. Lets hope they do it eh?